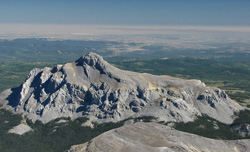 Province: Alberta
Headwater: Bow
Visible from Highway: 1, 940N
Year Named: 1958
Named for: The mountain appears black, particularly when viewed from the east and clouds shroud the peaks behind it.

The location of this mountain is unusual because it is not part of the general front range of the mountains, but rather rises alone some five kilometres to the east with no other mountains to the north or south of it. Blackrock Mountain's special location was noticed by the Alberta Forest Service when it was choosing locations for its initial series of fire lookouts during the late 1920's. A relatively high mountain set somewhat east of the main front range provides an ideal viewpoint of forested foothills to the north, east, and south. Built at the very summit during 1929 and tethered to the site by cables, the wooden lookout building was manned during the summer months by a "lookout" who communicated with the forest rangers below by a telephone cable. For the thirty years it was in operation, the lookout was supplied by packhorses. An impressive amount of rockwork had to be done in order to build a horse trail up the steep scree slopes which provided a route though the cliffs near the summit. Today, the lookout still stands on what is probably the most exposed building site in Canada and the horse trail remains as well, both testifying to some fine workmanship by men who must have been very aware of the difficulties involved in building and servicing a residence on top of a mountain. The lookout was closed in 1952, replaced by two others at lower elevations. These were more easily serviced and less likely to be in the clouds and more effective for the spotting of smoke. *A hiking route to the summit is described in Gillean Daffern's Kananaskis Country Trail Guide. Note that there is a "Blackrock Mountain" (no space between "Black" and "Rock") on the border between Mount Robson Provincial Park and Jasper National Park.