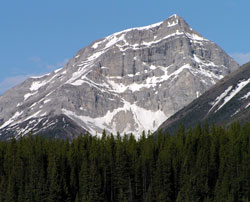 50.4400N -114.877W
Located on the continental divide in the Elk River Valley and upper Highwood River Valley at the head of Bishop Creek;

In the early summer a distinct capital "T" forms on the southeast-facing slopes of this peak which is visible for some distance as one drives up the Highwood Valley from Highwood Junction. The mountain is most striking from Highway #40, however, when viewed from the northeast, through the gap in the hills formed by the Loomis Creek valley. "THE COURAGE OF THE EARLY MORNING" This was the title chosen by W.A. Bishop for his father's biography. The phrase was used by a Montreal publisher in a tribute to William Avery "Billy" Bishop VC, Canada's top flying ace in World War I. Known as a flamboyant extrovert, Bishop shot down a total of 72 enemy aircraft including three on the daring, solo, dawn attack on a German airfield for which he was awared the Victoria Cross. Capt. Bishop's combat report for this day is as follows: "I fired on seven machines on the aerodrome, some of which had their engines running. One of them took off and I fired 15 rounds at him from close range (60') and he crashed. A second one was taking off, I opened fire and fired 30 rounds at 150 yds. range, he crashed into a tree. Two more were then taking off together. I climbed and engaged one at 1000' finishing my drum, and he crashed 300 yds. from the aerodrome. I changed drums and climbed E. A fourth Hun aircraft came after me and I fired one whole drum into him. He flew away and I then flew 1000' under 4 Scouts at 5000' for one mile and turned W. climbing. The aerodrome was armed with one or more machine guns. Machines on the ground were 6 Scouts (Albatross type I or II) and one two-seater. (Sgd) W.A. Bishop, Capt. Bishop's squadron commander comments were added to the bottom of the report: "Cap't Bishop had been encouraged to catch the Hun aircraft referred to in VII Corps Daily Intelligence Summary No. 151. His method was not quite what I intended. He was several times at a height of 50 ft. over this enemy aerodrome at least 17 miles E. of the lines. His machine is full of holes caused by machine gun fire from the ground." During the Second World War Billy Bishop served as an Air Marshall, playing an important role in the British Commonwealth Air Training Plan by inspiring a new generation of pilots to serve their country in the air at its time of need.

Looking north-northeast to Mount Bishop from the Elk Valley

Looking west-northwest to Mount Bishop from Highway #40 (The "T" is beginning to form.)