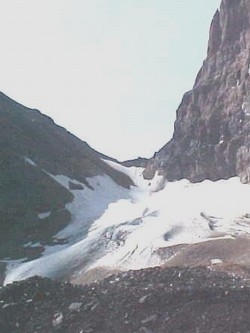 Samuel Allen, Walter Wilcox, and Yandell Henderson reached the summit of Wenkchemna Pass after travelling over Wastach Pass from their camp at the head of Paradise Valley in August of 1894. Only Wilcox descended the steep slopes to the head of what is now known as Prospectors Valley to view the glacier at its head. The following day Allen recrossed the Wenkchemna Pass and reached Opabin Pass. He had left very early in the morning and by 10:00 am was on the pass and looking to the north. He wrote, "Before me I saw a broad valley, destitute of vegetation, and walled on either side by lofty, precipitous cliffs, the glaciers at the feet of which resembled the dashing waves of a stormy sea. From my feet downward swept the neve, terminating in a fine glacier below, while two lakes appeared in the rocky valley, for the sake of uniformity I have known as the Opabin Lakes." [Sandford, "Yoho-A History and Celebration of Yoho National Park"]

Later that year Allen reached the upper Opabin Valley and viewed the pass from the north.