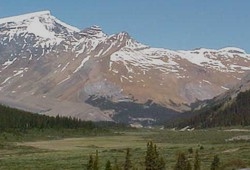 "The country here was much more open and the going perfectly easy. Our course lay W.N.W.; and, passing through some pretty park like glades, the outfit emerged into a broad, green, and nearly level valley. We had passed the watershed unawares; for the tiny rivulet that now meandered, parallel with us, peacefully through the meadows was the infant Athabasca starting on its long journey to the Great Slave Lake and the Arctic Ocean." Norman Collie and his party had just arrived at Sunwapta Pass and were about to be the first to see and explore the Columbia Icefields that lay hidden above them. Although the Icefields Parkway winds its way through the pass, much of the area remains as Collie saw it over one hundred years ago.

Sunwapta Pass is the boundary between Banff and Jasper National Parks, the waters from its summit flowing south to the Saskatchewan River and north to the Athabasca River. From the pass, the highway travels through Collies _broad, green, and near level valleyî for five kilometres before reaching the Icefield Parkway. These meadows are at an elevation of over two thousand metres, beautiful on many days in summer, but often windswept, cold, and barren during the winter

In 1896 Walter Wilcox, Robert Barrett, and guides Tom Lusk and Fred Stephens travelled north over Bow Pass, up the Saskatchewan River and became the first to reach Sunwapta Pass. They were on a sixty day expedition and searching for a pass through which to reach the Athabasca River. Impressed by, _the tremendous grandeur of mountain scenery,î the group explored the area, Barrett even attempting to climb, _a beautiful, glacier-hung peakî which must have been Mount Athabasca.

In order to determine if the party could continue over the newly discovered pass, Fred Stephens was able to pass between the toe of the Athabasca Glacier and the steep slopes of Mount Wilcox but found that, _the route which first appeared most promising was blocked by a canyon.î The party then proceeded over a high grassy pass to the east of what is now known as Mount Wilcox, descending into the Sunwapta Valley beyond Tangle Falls and the steep canyon to continue their explorations. The pass was later named in honour of Walter Wilcox.

When Walter Wilcoxs party reached Sunwapta Pass in 1896 the Little Ice Age was ending but Athabasca Glacier still extended to where the Icefields Parkway is today and was as high as the tops of the lateral moraines we see on either side of the valley. The glaciers have retreated dramatically since that time, leaving the lateral moraines behind.