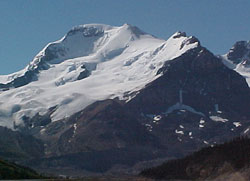 The outstanding, glacier draped peak immediately south of Athabasca Glacier is Mount Athabasca. One of the classic peaks of the Canadian Rockies, practically the entire mountain is above treeline.

In 1896 Walter Wilcox, Robert Barrett and guides Tom Lusk and Fred Stephens travelled north over Bow Pass, up the Saskatchewan River and became the first to reach Sunwapta Pass and enjoy a view of Mount Athabasca. They were on a sixty day expedition and searching for a pass through which to reach the Athabasca River. Impressed by, "the tremendous grandeur of mountain scenery," the group explored the area, Barrett even attempting to climb, "a beautiful, glacier-hung peak" which must have been Mount Athabasca.

In order to determine if the party could continue over the newly discovered pass, Fred Stephens was able to pass beween the toe of the Athabasca Glacier and the steep slopes of Mount Wilcox but found that, "the route which first appeared most promising was blocked by a canyon." The party then proceeded over a high grassy pass to the east of what is now known as Mount Wilcox, descending into the Sunwapta Valley beyond Tangle Falls and the steep canyon to continue their explorations. The pass was later named in honour of Walter Wilcox.

In 1898 Sunwapta Pass was visited by Norman Collie, Herman Woolley, and Hugh Stutfield. They too were most impressed with Mount Athabasca, Stutfield and Collie later writing, "Immediately opposite our camp, to the south-west, rose a noble snow-crowned peak, about 12,000 feet in height, with splendid rock precipices and hanging glaciers; and on its right the tongue of a fine glacier descended in serpentine sinuosities to the bottom of the valley. We named them Athabasca Peak and Glacier respectively. The spirits of us three climbers rose high, and our blood was stirred within us at the thought of being once more on the ice and snow. It was decided, therefore, that we should attack the peak next day."

On August 18, 1898, Norman Collie and Hermann Woolley became the first to grasp the extent and significance of the Columbia Icefield when they completed the first ascent of Mount Athabasca, the spectacular peak to the east of the Icefield and just south of Athabasca Glacier. Collie's description of the view from the summit is classic Canadian Rockies literature and it is a testament to his intelligence that he understood the geographical significance of what he saw. "The view that lay before us in the evening light was one that does not often fall to the lot of modern mountaineers. A new world was spread at our feet; to the westward stretched a vast ice-field probably never before seen by human eye, and surrounded by entirely unknown, un-named, and unclimbed peaks. From its vast expanse of snows, the Saskatchewan Glacier takes its rise, and it also supplies the headwaters of the Athabasca; while far away to the west, bending over in those unknown valleys glowing with evening light, the level snows stretched, to finally melt and flow down more than one channel into the Columbia River, and thence to the Pacific Ocean."

What Collie and Woolley had the pleasure of discovering was the largest icefield in Canadian Rockies, encircled by a most spectacular collection of nine high peaks (Stutfield Peak, North Twin Peak, South Twin Peak, Mount King Edward, Mount Columbia, Mount Bryce, Mount Andromeda, Snow Dome, Mount Kitchener). Together with Hugh Stutfield, who had offered to go hunting that day to restock their larder, they named seven of them.

Only a small portion of the Icefield is visible from the Icefield Parkway. The Athabasca Glacier is the most accessible and visible of the glaciers which flow from the Icefield, but there are numerous others. Over three hundred square kilometres in area, the depth of the icefield varies from 100 to 365 metres. The average annual snowfall on the upper reaches is seven metres.