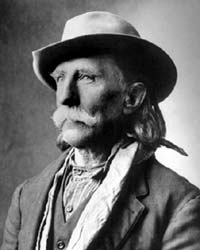 "I had settled long before that when the time for squatting came I would come back to this spot." The time came in 1877, following his murder trial and subsequent acquital in a Montana courtroom.

John George Brown was 26 years old when he travelled the old Indian trail over South Kootenay Pass, first saw the area around Waterton Lakes, and determined that this would eventually be his home. His association with the Kootenay Tribe of southeastern British Columbia led to his nickname, Kootenai. Born in County Clare, Ireland, Brown had served with the British Army during the Indian Mutiny before sailing to North America in 1861. He was attracted to the goldfields of Barkerville, British Columbia about which he later wrote, "I had no money when I went to the Cariboo and I had none when I came out in 1864, but I had a little fortune for a while inbetween." He then went on to serve as a constable in the gold rush town of Wild Horse Creek. In the summer of 1865 while travelling with four companions, he passed though the Waterton Lakes area and wrote, "This is what I have seen in my dreams, this is the country for me." He would return twelve years later to play a pivotal role in the development and history of this area which so impressed him.

Those twelve years would see Koonenai wounded in the back by a Blackfoot arrow (it is said that he pulled the arrow out himself and treated the wound with turpentine), spend time as a Pony Express rider, endure capture by Sitting Bull and a band of Sioux, and then subsequently escape. By 1877, with the buffalo rapidly disappearing he turned to hunting wolves. Brown was then accused of murder in Fort Benton, Montana and after his acquittal crossed the border with his family to settle in his chosen area.

Kootenai ran a trading post at Waterton but later turned to hunting, ranching, commercial fishing, and serving as a guide to travellers passing through the area. Constantly extolling the area as one of great beauty with excellent fishing and hunting nearby, Brown played a key role in promoting the area. In an article written for the Fort Macleod Gazette, the reporter described the attractiveness of the area and then went on to promote Brown's guiding business, "There is a boat on the lake and horses can be procured from the guide, Mr. Brown. For trolling and flyfishing there is abundant tackle and all the necessary requisites, and parties visiting his place are always sure of their fish as Mr. Brown can catch them where all others fail."

The southwestern corner of Alberta, like all the prairies, was changing as ranches were established and grasslands ploughed. Kootenai Brown began to worry that the beauty and wildlife of his home would be unable withstand the coming onslaught. He was able to convince others, in particular rancher F.W. Godsal, to lobby the government to take action. Godsal wrote a letter which according to the Lethbridge Herald, "crystalized into action the wishes of Kootenai Brown (that the) Waterton Lakes District should be erected into a national park for the preservation of its natural beauty and its wildlife for all time."

After this experience as a political activist and nineteenth century conservationist, Kootenai went on to play yet another role. In a letter to his friend and Member of Parliament he wrote, "A park overseer is required. There have been over 500 people, picnic and tourist, here this season; a great number are here now (August 16, 1909). Many of them wantonly or thoughtlessly destroy shade trees and leave campfires burning which are a menace to all of us, the mountains and all things. If I can obtain this office I am willing to put up an office close to the lake and look after things to the best of my ability."

Kootenai did get the job and when the area became Waterton National Park in 1911 he was appointed the park's first superintendent. Already a legend in southern Alberta, the small, seventy year old man with the white handlebar mustache continued to look after "his" park and successfully recommended in 1914 that it be increased in size from its initial 35 square kilometres to 1095 square kilometres. At this point the management required a younger man but Kootenai Brown continued to, "look after things to the best of (his) ability" as a park ranger until his death in 1916. He was buried along the shores of Lower Waterton Lakes.

He was remembered as, "a clean fighter, a straight shot, loyal to his friends, respected by his enemies, ready to face any danger, hardship or deprivation without a murmur, and to defend the region. . .from the ruthless attack of poacher and vandal." ("Waiting for the Light" by Brock Silversides)