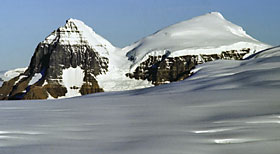 52.2239N -117.434W
Located in the upper Athabasca River Valley adjacent to the northeastern part of the Columbia Icefield

"When approached from the Columbia Icefield, The Twins present gentle snow and ice climbs. North Twin is, in fact, a popular ski ascent. To the north however, the North Twin drops vertically for over 1500 metres towards the Athabasca River. This face is world renowned amongst climbers." -Courtesy Chic Scott

James Outram wrote of these peaks, "Toward the north, above a sharp depression and beyond a magnificent cirque of rock and glacier that separates them from Mount Columbia, were the Twins, the loftier pure white and its brother darkly impressive."

North Twin is the highest mountain entirely in Alberta and the third highest in the Canadian Rockies.