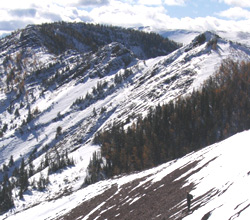 This feature is part of Windsor Ridge, the high points of which were formerly known as Castle Mountain. When the mountain was renamed, the high point on the west end was named Castle Peak. North Castle is a much lower feature 2.3 km north-northwest of Castle Peak.

North Castle isn't castle-like at all. Rather it's a low, rounded feature at the northeastern end of the long ridge known as Windsor Ridge. It is 250 metres (800 feet) lower in elevation than Castle Peak.