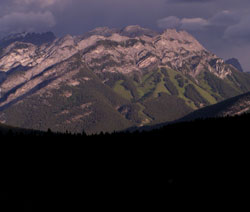 Photo: Looking northwest to Mount Norquay from the Trans-Canada Highway

John Norquay was a tall, impressive individual of Metis origin who is said to have weighed 300 pounds. He became fluent in six languages and this benefitted him when he became premier of Manitoba (1878-1889). He played a role in the Reil Rebellion, supporting Louis Reil's goals while opposing his tactics. The Duchess of Somerset met John Norquay in 1889 and wrote of him, "The most remarkable person we saw was Mons Narquet [as she spelled his name], a half-breed, a most able man, who fifteen years had been premier. . .He was by far the most eloquent member of the House, and very proud of his Indian descent. In a former session he was jeered at for this by a Scotchman, who should have known better. Narquet's reply, however, was so dignified that it silenced any further remarks, and left the member who had attacked him somewhat humiliated; it was to this effect, that he was proud of the Scotch blood in his veins, but still prouder of his Indian descent, knowing that an attack of the desscription to which he had been subjected would never have been made by an Indian." [Beers] It has been said that John Norquay made the first ascent of Mount Norquay and in fact he did climb part way up the mountain but did not reach the summit. This was a year before his death and he was in poor health. [Lukasta]

Photo: Looking northeast to Mount Norquay from the Trans-Canada Highway near the junction with the Bow Valley Parkway