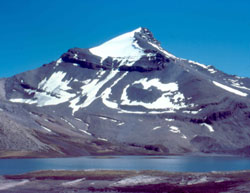 52.2394N -117.172W
Located in the upper Sunwapta River Valley at the headwaters of Nigel Creek; east buttress of Wilcox Pass

Nigel Peak is a high, three km long ridge that forms the boundary between Banff and Jasper National Parks to the northeast and north of Sunwapta Pass. The northwest summit is the highest point but the southeast summit is very prominent as the Columbia Icefield area is approached on the Icefields Parkway. Nigel Vavasour was a packer who accompanied Norman Collie and Hugh Stutfield to the Columbia Icefield area in 1897. The mountain was named by the mountaineers during a sheep hunt in which Nigel was involved. Collie wrote, "We gave them another hour and then followed them up an open valley, towards a lake that lay at the foot of a high snow-clad peak of which Nigel is now the eponymous hero." In 1944, Nigel Peak was the scene of an avalanche fatality. The "Lovat Scouts" was a Scottish military unit which spent three months training in mountain warfare techniques in the Canadian Rockies. Five hundred men were involved and the unit was to be a critical component of a possible invasion of Norway's mountainous terrain which was at that time occupied by enemy forces. The chalet at the Columbia Icefields was used as a training base and on January 19th, a party of twelve guided by Sgt. Peyto of the Canadian army (the son of legendary outfitter Bill Peyto) set off for Nigel Peak. It was a bright, warm day and as the party approached the summit on mountain?s south slopes an avalanche carried the entire group down towards Wilcox Pass. As they prepared to descend to safer ground, a second avalanche broke loose but missed the party. Then, as they were nearing the valley below a "huge" avalanche came down burying L/Cpl. Sandy Collie and Cpl Angus Cameron. Cpl. Cameron?s hand was left uncovered and he was rescued but L/Cpl. Collie was buried under four to five feet of snow and did not survive.

Photo: Looking northwest to the southeastern summit of Nigel Peak from the Icefields Parkway

Northern summit of Nigel Peak from below Mount Athabasca