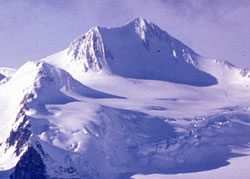 This peak was named by Norman Collie after Mount Nanga Parbat in the Himalaya upon which he had climbed in 1895. "Nanga" means bare and "Parbat" means a hill or mountain.

Norman Collie and Mummery, together with Geoffery Hastings, climbed together in the Alps in 1894 and the following year in the Himalaya. They had been climbing for over a month on August 23rd when Mummery set out with two "Ghurkhas," Ragobir and Gomar Singh, to cross Diama Pass near Mount Nanga Parbat and perhaps make another attempt at the summit which had eluded the party. Collie seems to have been suffering from the many weeks at altitude and according to a letter written by Mummery, "was not keen on it."

Mummery and the Ghurkhas were never seen again. It was not until September 13th that Collie and Hastings set out on a three day trip to reach the camp where they had last seen their friend. However this late in the season searching the high glaciers was out of the question and according to Collie, "Slowly we descended, and for the last time looked on the great mountain and the white snows where in some unknown spot our friends lay buried."