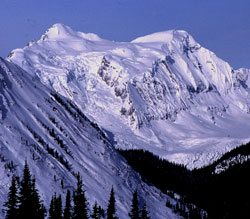 One of the high peaks in the Mummery-Freshfield Icefield area, Mount Mummery's eastern slopes are draped with ice that flows into the Blaeberry Valley.

In his book, "The Glittering Mountains of Canada," J. Monroe Thorington describes the view he had of Mount Mummery while descending from Amiskwi Pass to the Blaeberry as follows, "one zigzags up a sidehill of open woods whence an impressive view is had of Mount Mummery, a white giant, rising across the valley into two splendid peaks, above a curling green glacier cleft by dark moraine lines."

Albert F. Mummery was an inspiring figure to British Climbers at the end of the Nineteenth Century. Frank Smythe described him as a, ?prince among rock climbers, and the prototype of the modern rock climber and mountaineer?. If the old boiling-point thermometer and geological notebook excuse for mountain climbing still prevailed in certain quarters, Mummery killed it stone dead. He climbed simply and solely for the fun of the thing.?

Norman Collie named in excess of thirty peaks in the Canadian Rockies, but this one must have been one of the most meaningful. Collie and Mummery, together with Geoffery Hastings, climbed together in the Alps in 1894 and the following year in the Himalaya. They had been climbing for over a month on August 23rd when Mummery set out with two "Ghurkhas," Ragobir and Gomar Singh, to cross Diama Pass near Mount Nanga Parbat and perhaps make another attempt at the summit that had eluded the party. Collie seems to have been suffering from the many weeks at altitude and according to a letter written by Mummery, "was not keen on it."

Mummery and the Ghurkhas were never seen again. It was not until September 13th that Collie and Hastings set out on a three day trip to reach the camp where they had last seen their friend. However this late in the season searching the high glaciers was out of the question and according to Collie, "Slowly we descended, and for the last time looked on the great mountain and the white snows where in some unknown spot our friends lay buried."

-"Happily for us, the great brown slabs bending over into immeasurable space, the lines and curves of the wind-moulded cornices, the delicate undulations of fissured snow, are old and trusted friends, ever luring us to fun and laughter and enabling us to bid a study defiance to all the ills that time and life oppose." -Albert F. Mummery