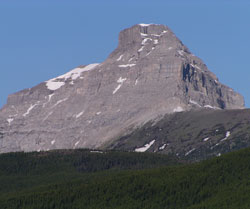 Photo: Looking west-northwest to Mount Muir from the Highwood Valley

Mount Muir is in a special location as it is the northernmost peak in the High Rock Range which stretches from the Crowsnest Pass. The mountains to the north are part of the Elk Range which terminates beyond Highwood Pass. Geologically, there does not seem to be much significance to this point at which the range forming the divide changes name. However, topographically there is a change. In the Elk Range to the north the mountains form more of a continuous wall whereas to the south in the High Rock Range the mountains are generally separate entities with passes and cols beween them.

Alexander Muir is the only composer to have had a mountain of the Canadian Rockies named in his honour. He wrote the music and lyrics for "The Maple Leaf Forever" in 1867, the year of Canadian Confederation, and the song became the un-official Canadian national anthem. The lyrics of the opening verse are as follows and the predominant view of the times that the country was of "British-only" origin with a Scottish, Irish, and English heritage is clear:

In days of yore, from Britain's shore,

Here may it wave, our boast, our pride,

And joined in love together,

Written originally in French, "O'Canada" was first performed in Quebec in 1880 and English lyrics were not written until 1908. At the time of the First World War and the Interprovincial Boundary Survey, "O'Canada" was becoming the best known patriotic song in the country but "traditionalists," as it appears survey commissioners Arthur Wheeler and Richard Cautley may have been, obviously still held "The Maple Leaf Forever" in high regard.

The pass which separates Mount Muir and Mount McPhail was named Weary Creek Gap after Weary Creek, which flows from the pass into British Columbia. From this vantage point the pass is hidden behind a high grassy ridge which stretches east from the steep cliffs of Mount Muir. The pass was known as the Elk Trail Pass to the Stoney Indians who have a legend which describes how all the elk from the Bow to the Crowsnest travelled through this pass from the heavily hunted Alberta side to the Elk Valley in British Columbia.

Looking east to Mount Muir from the Elk Valley

Photo: Looking west-southwest to Mount Muir from the Highwood Valley

Photo: Looking west-northwest to Mount Muir from the Highwood Valley