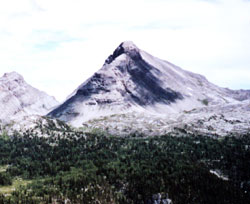 Province: BC
Headwater: Kootenay
Year Named: 1964
Named for: Morro, Frank (F/Sgt Morro (bomb aimer) was from Cranbrook, British Columbia. He was killed on December 4, 1943 when his when No. 429 Squadron Halifax bomber was shot down at Kleikenkneten, Germany during an operation to Leipzig.)