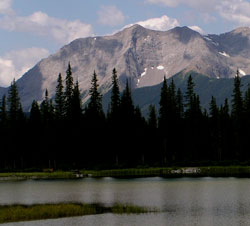 Photo: Looking west to Mount Morrison from the Smith-Dorrien Road

Mount Morrison and Mount Turner are part of the Park Ranges and lie beyond the Spray River (Mount Shark and the Spray Range are east of the Spray River Valley). The two mountains stand together, between the valleys of Bryant Creek to their north and Currie Creek to their south. This is no coincidence as Lieutenants Morrison and Turner fought side by side in 1900 with the Royal Canadian Dragoons during the South African War. They were under the command of Brigadier-General Horace Smith-Dorrien.

The Dragoons were a cavalry unit and had been ordered to cover the retreat of a British "search and destroy" column which was operating in the Komati river basin. The retreat was a slow operation as the column's "baggage train" was made up of wagons pulled by oxen. With only a single colt machine gun, the Dragoons were not in a strong position to defend the column. Lieutenant Morrison wrote, "I turned in my saddle and... Square across our rear a line of Boers a mile long was coming on at a gallop over the plain, firing from their horses. It looked like the spectacular finale in a wild west show. They were about 1500 yards away, but coming on rapidly and shooting at our gun, most of them, to try and stop it... I thought indeed we saw our finish."

Two troops of the Dragoons, one under the command of Lieutenant Turner, dismounted to try to hold off the attack. For his part in the action Lieutenant Turner was awarded the Victoria Cross, the citation reading, "When the guns were in danger of being captured, Lt. Turner, although he had already been twice wounded, dismounted and deployed his men at close quarters and drove off the enemy, thus saving the gun."

During the First World War, Lieutenant-General Sir Richard E. W. Turner commanded the Canadian troops who held their positions during the first poisonous gas attacks at Ypres in 1915. Later, he became responsible for the training of all Canadian troops in Britain.

Retiring as a Major General, Sir Edward W. B. Morrison DSO had a successful career in journalism, becoming Editor-in-Chief of the Ottawa Citizen from 1898 to 1912. He was awarded the Distinguished Service Order for his service in Africa and later became officer commanding the Canadian Artillery during World War I.