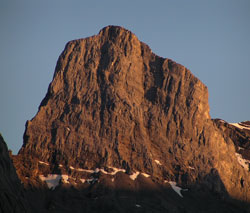 Looking south-southeast to Middle Sister from the Trans-Canada Highway

One of the most photographed views in the Rockies, the Three Sisters are probably recognized by more people driving along the Trans-Canada Highway than any of the other mountains in Alberta. They rise immediately south of Canmore in the Bow River Valley, just downstream from the east gate to Banff National Park. Although James Hector did not name the mountains when he passed by in 1858, the geologist of the Palliser Expedition clearly appreciated the view from what is now the Canmore area and wrote in his diary, "Towards evening an excellent camping place was reached opposite a mountain with three peaks, which forms a very imposing group. In a nearby clearing we made camp and stayed for several days making a geological study of the rock formation." It was Albert Rogers, a nephew of Major Rogers, the discoverer of Rogerí¢ä‰åä‹¢s Pass in the Selkirk Mountains, who named the three peaks in 1883. He recalled, "There had been quite a heavy snowstorm in the night, and when we got up in the morning and looked out of the tent I noticed each of the three peaks had a heavy veil of snow on the north side and I said to the boys, "Look at the Three Nuns." They were called the Three Nuns for quite a while but later were called the "Three Sisters," more Protestant like I suppose." The name "Three Sisters" first appeared on Dr. George Dawson's map of 1886 and it is quite likely it was he who thought that the name Three Sisters would be more appropriate. Geologically, The Three Sisters are complex and involve the Rundle, Banff, and Palliser formations that form Mount Rundle in nearby Banff National Park. Geologist and author Ben Gadd refers to this as the "Devonian Sandwich" or "Late Paleozoic Sandwich". The Rundle formation forms the Big Sister, the more easily eroded Banff shale forms the low area below it, and then the Palliser formation forms Middle Sister -all this in a relatively undisturbed manner similar to what is seen on nearby Mount Rundle. However Little Sister involves some much more complex faulting and folding, the Palliser again forming the summit but the lower cliffs are part of the younger, Rundle formation. The highest of the Three Sisters (Big Sister) was first climbed in 1887 by James McArthur. The lowest (Little Sister) is a much more difficult ascent and was not climbed until 1925 by a party led by Canmore's most illustrious mountain man, Lawrence Grassi. The centre peak is known as Middle Sister. James McArthur James Joseph McArthur was a Dominion Land Surveyor who worked in the Canadian Rockies from 1886 to 1893, completing a topographic survey of the mountains along the Canadian Pacific Railway's main line from Canmore to the summit of the Columbia Mountains. He mapped 5000 square kilometres at a scale of 1:20,000 and contour interval of 100 feet. In the course of this detailed work, he made some of the earliest first ascents in the Rockies including such well known peaks as Mount Rundle, Mount Bourgeau, Mount Stephen, and the highest of the Three Sisters. In a single year, 1889, McArthur ascended 43 peaks in excess of 2500 metres, travelling 650 kilometres through very rugged terrain. A bulky, twenty pound camera and fifteen pound transit was carried to each summit. Between 1887 and 1893 he is said to have made some 160 ascents and travelled approximately 2400 kilometres. In his book, "Pushing the Limits - The Story of Canadian Mountaineering," Chic Scott refers to J.J. McArthur as "The First Canadian Mountaineer." As well as Mount McArthur at the head of the Little Yoho Valley, one of the most beautiful lakes in the Rockies is named in his honour.

Looking southeast to Middle Sister from the Trans-Canada Highway

Looking south-southeast to Middle Sister from the Trans-Canada Highway