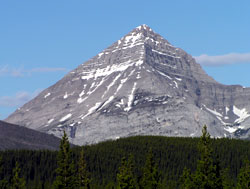 Also known as "The Pyramid" for obvious reasons, Mount McPhail rises spectacularly to the north of Weary Creek Gap. The cirque at the base of its northeastern face contains a beautiful and very deep lake. Raymond M. Patterson felt that he was the first white man to visit the lake and eloquently describes its discovery in his book "The Buffalo Head" which should be read by anyone interested in the history of the Highwood valley.

A former member of the Surveyor General's staff, Corporal Norman R. McPhail began active service with the Canadian Field Artillery during September, 1914. He fought for over three long years, enduring many important battles, being wounded, and suffering from infection. Sadly, he was killed in action on 6 November, 1917. Cpl. McPhail?s position was being shelled while his unit's guns were putting up a barrage near St. Julien. A round exploded just behind his gun and a splinter from it struck him just below his left shoulder, penetrating his heart. He was twenty-six years old.

At the time his parents lived in Carlton Place, Ontario. Corporal McPhail was buried in a military cemetery in Belgium. A photo of Private McPhail is available at http://www.vac-acc.gc.ca/general/sub.cfm?source=collections/virtualmem.

THE PYRAMIDS OF THE CANADIAN ROCKIES

There are at least seven mountains in the Canadian Rockies that have been known as "Pyramid." Only two officially carry the name, a third having had the name removed in order to avoid confusion with the other "Pyramids."

Peter Fidler was the first European to enter the Canadian Rockies and the first to name a peak. He noted in his journal on December 7, 1792 that he saw a, "remarkable high cliff very much resembling a pyramid from which very near resemblance I shall call it by that name." He measured bearings to the feature and used it to calculate his position. It is likely that he was referring to what we now know as Mount GlasgowWhite Man Pass in 1845, Catholic priest/explorer Pierre-Jean Pierre-Jean De Smet wrote, "The valley is bounded on either side by a succession of picturesque rocks, whose lofty summits, rising in the form of pyramids, lose themselves in the clouds." On his map he noted only one of these, naming it "The Pyramid." This must have been the peak now known as Mount AssiniboineJames Hector of the Palliser Expedition who named the mountain in 1859. Although the mountain''''s slopes from this angle are similar to those of the Egyptian pyramids, the peak lacks the three-dimensional aspect that a true pyramid requires.

Mount ChephrenNorman Collie in 1897. At the same time he named its neighbour, which was covered in snow, White PyramidPyramid MountainJ. Monroe Thorington, a prominent mountaineer and author of the era, liked the association of the peak with the pyramids of Egypt and recommended the name Mount Chephren. Chephren, or Khafre, was the fourth pharaoh of the Fourth Dynasty of Egypt and built the second of the three Great Pyramids. White Pyramid's name was thought to be different enough from the Pyramid Mountain near Jasper and that name was retained.

In 1892, Arthur Coleman named the fourth highest peak in the Rockies "Pyramid." It was subsequently renamed Mount Clemenceau by the Interprovincial Boundary Commission in 1919 after Georges Clemenceau, the President of France during the final years of the First World War.

Mount McPhail, in the upper Highwood Valley, was known locally as "The Pyramid" until it was officially named by the Boundary Commission in 1918. The surveyors at that time were influenced by the number of Canadian casualties during the First World War and named the peak to honour N.R. McPhail, a member of the Surveyor General''''s staff, who was killed in action in 1917.

Of the seven mountains that have carried the name "Pyramid," Mount Glasgow, Mount McPhail, and Mount Assiniboine are the closest to the correct three-dimensional shape when viewed from the appropriate angles, but they are among those that never, officially at least, have carried the name.

Photo: Looking west to Mount McPhail from the Cat Hills

Looking east to Mount McPhail from the Elk Valley