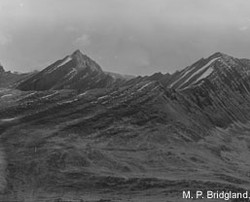 George McKean was born in Wellington, England in 1888. He came to Canada at the age of fifteen and joined two brothers working on a ranch near Lethbridge, Alberta. After living for a time in the Connaught area of Calgary he attended the University of Alberta prior to enlisting in 1915. Assigned to the Royal Montreal Regiment, he was awarded the Military Cross for his bravery in a number of operations prior to be awarding the Victoria Cross for his action during a raid on April 27/28, 1918 at Gavrelle, France.

The Victoria Cross action occured when Lieutenant McKean's party was held up at a block in the communication trench by intense fire. He ran into the open, leaping over the block head first on top of one of the enemy. Whilst lying there, he was attacked by another with a fixed bayonet. He shot both of these men, captured the position, then sent back for more bombs, and until they arrived he engaged the enemy single-handed. He then rushed a second block, killing two of the enemy, capturing four others, and driving the remainder into a dug-out, which he then destroyed.

McKean was involved in heavy fighting later that year at the town of Cagnicourt. It was one of three heavily fortified villages held by the Germans on the front known as the Drocourt-Queant Line. 100,000 soldiers of the Canadian Corps suffered 11,000 casualties as they attacked five enemy positions over nine days.

Lt. McKean and a small group of soldiers from the Royal Montreal Regiment were ordered to advance on Cangnicourt but an artillery shell killed or wounded all but McKean and two of his soldiers. They arrived at the village to find German soldiers hiding around the village's main square. McKean began shouting and waving as if he wre leading a massive force into the town. The enemy soldiers were tricked and fled in terror. One account of the battle says that one of the soldiers was waving his pistol in "wild west fashion" and it is thought that this was Lt. McKean. 85 years later, in 2003, the main plaza in Cagnicourt was renamed Place George Burdon McKean and a plaque unveiled.

He survived the war but never again returned to Canada. Instead he returned to England where he operated a lumber mill. Sadly, he was killed in an industrial accident att he mill in 1926. Mount McKean in the Victoria Cross Range was named in his honour in 1951. [G. Semmens; The Calgary Herald; 2003-09-06]

Photo: Looking northeast to Mount McKean (left) and Emigrants Mountain from Highway #16 near the east end of Yellowhead Lake