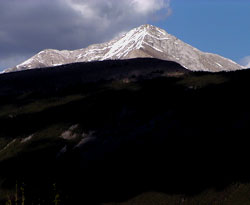 50.8969N -115.056W
Located in the Kananaskis River Valley opposite Mount Kidd at the head of Wasootch Creek

Mount McDougall lies on the eastern side of Highway #40 in the Kananaskis Valley opposite Mount KiddMount Denny), who was with the NWMP at the time, described the incident in his book "March of the Mounties." -"Toward the end of the bitter winter of 1875-1876, the Reverend George McDougall, with his sons John and David, came down from Morley to secure a suppy of buffalo meat and camped on Nose Creek north of Fort Calgary. The minister left camp alone one morning to hunt. A blizzard came up during the day and he never returned. The police searched for several days and picked up the horse, but it was a week before the body was recovered. The minister had let his mount go, wandered round on foot and succumbed to the intense cold. This was the first death at Calgary since the arrival of the police and it cast a shadow over the New Year." On August 14, 1941 an Avro Anson twin-engined training aircraft from No. 3 Service Flying Training School was engaged in an instrument flying instruction flight when it became trapped in Canyon Creek and crashed into the east side of Mount McDougall. LAC Frederick William Greenfield of Madison, Saskatchewan and F/O Ian Macdonnell Sutherland-Brown of Victoria, B.C. were killed. Another airman, LAC McGruther survived the accident and was rescued by ground forces made up of RCAF personnel and civilians. Doug Boyd of #10 Repair Depot assisted in the recovery of the aircraft and wrote, "The CO of the flying school said that the Anson would have to stay in the bush, but our C/O bet him a bottle of scotch that ?his boys? could get it out and won. I hope he got a good hangover out of it as it was no picnic getting the wreck down the mountain." The salvagers had to trek thirty miles in from their base camp to reach the site. (from "RCAF at War" by Larry Milberry (page 146); includes photos). In June, 1990, a memorial was erected on the Powderface Trail in Kananaskis Country. The plaque reads as follows, "ON AUGUST 14, 1941 AN AVRO ANSON TRAINING AIRCRAFT FROM No. 3 SERVICE FLYING TRAINING SCHOOL CALGARY CRASHED ON MOUNT McDOUGALL, ABOUT 10 KM WEST OF THIS SITE. THE LIVES OF FLYING OFFICER I.M. SUTHERLAND-BROWN AND LEADING AIRCRAFTSMAN F.W. GREENFIELD WERE LOST. LEADING AIRCRAFTSMAN A.M.R. McGRUTHER WAS INJURED BUT SURVIVED THE ACCIDENT. THE DEDICATION CEREMONY WAS HELD NOVEMBER 10, 1989. THIS PLAQUE WAS UNVEILED BY SQUADRON LEADER A.M.R. (SANDY) McGRUTHER."