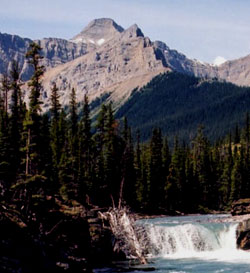 George Dawson's 1886 map refers to the peak as McConnell's Mountain. Mount Tyrrell and Mount McConnell lie adjacent to one another, although the summits are ten kilometres apart, to the north of the Red Deer River. Joseph Tyrrell and Richard McConnell were geologists who worked with Dr. Dawson. George Dawson's map of the Canadian Rockies (from the U.S. border to the Red Deer Valley and Kicking Horse Pass) was published in 1886 and was based on his field work completed during 1883 and 1884. The map included geological surface information and six complete geological cross-sections through various points in the Rockies. He was assisted by J.B. Tyrell (see Mount Tyrrell) in 1883 and J. White (Mount White) in 1884. R.G. McConnell contributed his work in the Bow Valley that was done in 1885. As a thank you to his assistants, Dawson named three peaks in the lower headwaters on the Red Deer Valley near what is known as Scotch Camp. The McConnell thrust fault carries paleozoic rock to the surface to form the front range of the Canadian Rockies in the Bow Valley. This is best seen at Yamnuska.