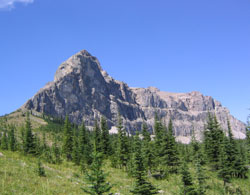 49.1886N -114.223W
Located on the continental divide in the Castle River Valley east of Jutland Brook and west of Font Creek

As the Interprovincial Boundary Survey was being completed during the First World War there are numerous mountains and other features which honour soldiers, airmen, sailors, and ships which were involved in this conflict. Mount Matkin is unique in that it is the only mountain in southern Alberta to be named in honour of a man who gave his life for his country during the Second World War. But the place-naming policies of the day were inadvertantly not followed precisely, but even if they had been, strangely enough it would still be named Mount Matkin. The mountain was un-named and no one seemed concerned about this until 1962 when the Geologic Survey of Canada, which must have been doing some work in the area, suggested to the federal Department of Mines and Technical Surveys that the name Citadel Peak be approved for the mountain. However the department noted that there was already a Citadel Peak on the B.C.-Alberta border and suggested to the Geographic Board of Alberta that, "an Alberta casualty name" be used. At this time there was a policy to name features after individuals who had been killed in action during World War II and whose home was closer to the feature than any other casualty. The provincial department, in error as it turned out, determined that Cardston was the nearest location which was the home-town of a casualty and recommended the name Mount Forsyth. Flying Officer Thomas R. Forsyth was a 21 year old navigator who had served with the Royal Canadian Air Force. His Halifax bomber was part of 431 Squadron when it was lost on April 28, 1944. But the federal department pointed out that there was already a Mount Forsyth in the East Kootenay district of British Columbia, only ninety miles away, and asked the provincial department to suggest another name. The department then recommended Mount Matkin and the name was approved. Sgt Philip Matkin, another native of Cardston, was also a navigator in the RCAF. At the time of his death at aged 24, he was still training with #12 Operational Training Unit and had not seen any action. He was tragically killed when he was run over by a taxi on Bayswater Road in London. But as it turns out there was another World War II casualty whose home was closer to the mountain than Cardston. Merlin Leigh Matkin, Philip's younger brother, listed his home as Waterton Lakes Park as the family had moved there in 1944. Flying Officer Matkin was a 21 year old pilot assigned to 514 Squadron of the Royal Air Force when he was killed on January 17th, 1945. 138 aircraft attacked the benzol plant at Wanne-Eickel, Germany and F/O Matkin's Lancaster was the only one not to return to base. All seven crewmembers were killed. So the mountain would have been named Matkin even if the oversight had not been made. It seems fitting that the memory of both brothers be honoured by the mountain's name. The Matkin brothers and F/O Forsyth were three of ten thousand young Canadians who were killed while serving with Bomber Command during the war.