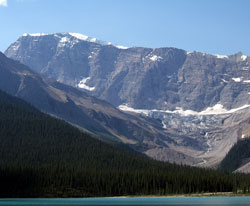 Range: Queen Elizabeth
Province: Alberta
Park: Jasper
Headwater: Athabasca
Ascent Date: 1923
Ascent Party: M. Blakeslee, B. Herzberg, D. Sutherland, E.J. Widdecombe
Year Named: 1908
Named by: Mary Schaffer
Named for: Vaux, Mary (Mary Schaffer named the mountain after her fellow art student, with whom she travelled to Glacier House in the Selkirks in 1899, part of the way on top of a boxcar. Mary Vaux became an important figure in the early history of the Rockies.)

Mary Schaffer named this spectacular peak in the Maligne Lake Valley for her friend who she travelled with to Glacier House in 1889. Mary Vaux was one of a wealthy and influential family from Philadelphia who were regular visitors to Glacier House in the Selkirk Mountains. In her book, "A Hunter of Peace," Mary Schaffer wrote, "And one more name we left behind, not carved upon a tree but in our memories. All day the thought of one who loved the hills as we did ourselves was in my mind, and though she could not be with us, yet did I long to share our treasures with her. On the lake's west shore rose a fine symmetrical peak, and . . .I said: 'With everyone's sanction I call that peak Mount Mary Vaux.'" There was no dissenting voice." The Vaux Family first visited the Selkirks in 1887, the first year that Glacier House was open. Brothers George and William were primarily interested in studying the glaciers, in particular the Illecillewaet, which they photographed and measured over a number of years, writing reports, drawing maps, and giving lectures to scientific groups and the Appalachian Mountain Club. Mount Mary Vaux is not visible from the northern end of the Maligne Lake but its glacier draped summit comes into view above the western side of the valley as one approaches Spirit Island and Samson Narrows by boat. Note that Mount Vaux is not connected to Mary Vaux. MARY VAUX WALCOTT (1860-1940) An American from Philadelphia, Mary Vaux (pronounce "vox") first visited the mountains of Canada in 1887, staying at Glacier House on Rogers Pass the first year it was open. Returning in 1894, she spent numerous summers in the Selkirks and the Canadian Rockies with her brothers George and William S. Over a number of years she participated in the study of glaciation, in particular the glaciers of the Selkirks near Glacier House but also of Wenkchemna, Yoho, and Victoria glaciers in the Rockies. These studies resulted in an illustrated pamphlet that the CPR produced and updated many times. Mary wrote the last update that was completed in 1922. She did this at a time when few women were involved in science. Mary was an original member of the Alpine Club of Canada and attended the first camp in 1906 at Yoho Pass. Together with her friend Mary Schaffer, she explored the Nakimu Caves near Rogers Pass. Her climb of Mount Stephen in 1900 was the first major ascent by a woman of a peak over 3050 m. In 1914, at the age of fifty-four, she married Dr. Charles D. Walcott, the noted geologist who discovered the Burgess Shale Fossils during his extensive studies of the Canadian Rockies. She continued her hobby of painting wildflowers while she accompanied him on his field trips. In 1925 the Smithsonian Institute published her watercolour drawings, some 400 of them, in a book entitled "North American Wildflowers." Dr. Walcott passed away in 1927. Mary made her last visit to the Yoho Valley in 1939 where it is said that she found, ?too many tourists in the mountains for her liking. . .tourists who didn?t care much about their surroundings. Of her love of the mountains and wilderness, Mary wrote, ". . .nowhere else is there such a wealth of beauty and interest, and I conclude that the haunts so attractive to the world have no attraction for me. Of course golf is a fine game, but can it compare with a day on the trail, or scramble over the glacier or even with a quiet day in camp to get things in order for tomorrow?s conquests? Somehow when once the wild spirit enters the blood, golf courses and hotel piazzas, be they ever so brilliant, have no claim and I can hardly wait to be off again." She was said to be, "Entirely self-reliant, she drew people to her by the force of her independence and character." [See Llysfran Peak] [Additional Information: "Off the Beaten Track" by Cyndi Smith]