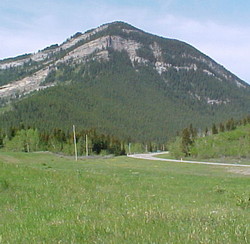 This small mountain stands in the centre of Highwood Gap, where the river cuts though the front range. It remains officially un-named but has been known by at least three different names over the years. In the early 1890's "Mackenzie and Mann" had a logging camp on Cataract Creek and this is probably the source of the name Mount Mann which was used prior to the 1920?s. Gill Daffern has two photos dating back to 1923 and 1924 taken on Mount Mann by J. A. Hutchinson, then Superintendent of Forests. On the back is written what the photo is of and where it is taken from (Mount Mann).

The peak has also been known as The Battleship.

Today it is also known locally as Grizzly Mountain. While riding in the area, Ross Edey and his father Merv saw a grizzly standing on its hind legs on top of the highest point of the ridge.

*A hiking route to the summit is described in Gillean Daffern's Kananaskis Country Trail Guide.

Photo: Mount Mann from the west on Cat Hills