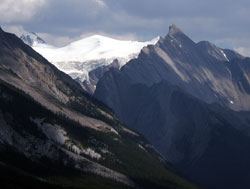 52.6517N -117.400W
Located in the Maligne Lake Valley, 7 km east of Samson Narrows at the head of the Rocky River; northeast of Maligne Lake

Province: Alberta
Park: Jasper
Headwater: Athabasca
Ascent Date: 1930
Ascent Party: W.R. Hainsworth, J.F. Lehmann, M.M. Strumia, N.D. Waffl
Year Named: 1911
Named by: Mary Schaffer
Named for: The peak takes its name from Maligne Lake. Mary Schaffer wrote that she had named the mountain for: "no reason at all except that?one mountain should surely bear the name of the lake."

Maligne Mountain is a large, glacier draped many-summited massif with five major peaks, none of which are separated by a col of more than 300 feet deep. In 1929 a party (names unknown) reached the summit of one of the lower peaks and the highest peak was reached in 1930. The mountain cannot be seen from the northern end of Maligne Lake but an impressive portion of it comes into view to the east as one approaches Spirit Island and Samson Narrows by boat.