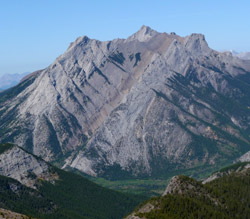 Province: Alberta
Park: Kananaskis
Headwater: Bow
Major Valley: Kananaskis
Visible from Highway: 40S
Year Named: 1922
Named for: (Lorette Spur was a ridge to the north of Vimy Ridge. It was the scene of very heavy fighting during WW I.

Lorette Spur, a high point just to the north of Vimy Ridge and separated from it by the Souchez River, was captured from the Germans by the French Army which suffered extremely high casualties in the battle. Pierre Berton, in his book "Vimy," relates a Canadian soldier's description of the carnage on Lorette Spur, "It made his flesh crawl: he had never before seen so many grinning skulls. Here was a maze of old trenches and ditches littered with the garbage of war -broken rifles, frayed equipment, rusting bayonets, hundreds of bombs, tangles of barbed wire, puddles of filth, and everywhere rotting uniforms, some French blue, others German grey, tattered sacks now, holding their own consignments of bones."

The capture of Lorette Spur was a significant event in French military history but why a prominent mountain in the Canadian Rockies was named in its honour is not known.

The lower highpoint on the southeastern end of the mountain rises picturesquely above the Kananaskis Valley and it is this peak that is commonly referred to as Mount Lorette although a much higher point lies to the northwest.