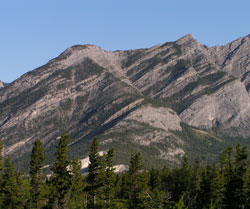 Door Jamb Mountain and Loder Peak are minor highpoints on the long ridge that rises from the Bow Valley to the south of Yamnuska. The highest point of this ridge reaches 2393 metres directly west of Yamnuska. Door Jamb Mountain shows only a single closed contour on the 1:50,000 topographical map and is only 750 metres south of Loder Peak. Loder Peak is likely the high point reached by Duncan McGillivray and David Thompson in the fall of 1800. On November 30, Thompson wrote that they climbed an, "inaccessible steep" ridge to the 7000 foot level. He went on to describe the ascent as follows: "We began to ascend the mountain. We found it very steep with much loose small stones, very sharp, but as we got higher and higher the loose stones became less frequent. Where the rock was sold, it was extremely rough and full of sharp points like an enormous rasp. This enabled us to mount places very steep, as the footing was good and sure, but it cut our shoes, sockes. etc., all to pieces in a thrice." Thompson described the view from the highest point that he reached: "Our view from the height to the westward was vast and unbounded. The eye had not the strength to discriminate its termination. To the westward, hills and rocks rose to our view, covered with snow. Never before did I behold so just, so perfect a resemblance to the waves of the ocean in a wintry storm." When the Canadian Pacific Railway reached the front ranges of the Canadian Rockies a Scot named McCanleish was already operating pot kilns to extract lime. Edwin Loder worked in the British merchant marine prior to coming to Canada where he worked as a woodcutter for the CPR. In 1888 he went to work for McCanleish where he learned the lime (cement) business. About 15 months after he was hired Loder reported to the RCMP that McCanleish had gone to Calgary on a business trip but had not returned. It is not known what became of McCanleish but he was never seen again. Edwin Loder maintained his interest in the lime plant and, after obtaining squatters rights and financial support from England, was able to make the limestone plant operational again. Other members of the Loder family settled in the area as well. The operation continued as Loder Lime Company until it was sold in 1952. The Loder's large home became the social centre of the community of Exshaw, the entire population being invited for Christmas dinner every year. After the meal, the children were put to bed and the parlour cleared of furniture for dancing to music provided by a piano player. A nearby quarry was started by a Mr. Butchart who left the area in 1908 ot start the Butchart Quarry on Vancouver Island. When quarrying on this site was completed at this site, it was transformed into the famous Butchart Gardens. [Frank Anderson; Frontier Guide to the Calgary Banff Highway] *A hiking route to the summit is described in Gillean Daffern?s Kananaskis Country Trail Guide Volume 1.