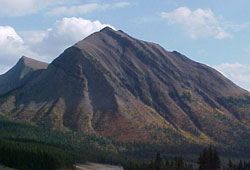 Photo: Looking south to Mount Lipsett from Highway #40. The southeastern summit is in the distance, at left.

Mount Lipsett lies to the east of Storm Creek and immediately to the west of the steep cliffs of Mist Mountain. Mesozoic rocks make up the entire feature and as they erode easily Mount Lipsett has gentle slopes on all sides. The mountain has two peaks, the southeastern being the highest Major General Louis James Lipsett was a senior officer in the British Army during the First World War. He commanded the 3rd Canadian Division during some of the bitterest battles of the war. He was killed less than a month before the end of the war while observing German positions. He was the last British general to be killed during the First World War. A friend recalled that as a commanding officer he was "always accessible and charming in manner, yet there was that about him which made him respected and no one ever presumed on his kindness, except the few old soldiers, who with their war ribbons up, and uncanny intuition, never failed to touch a soft spot in his heart." *A hiking route to the summit is described in Gillean Daffern's Kananaskis Country Trail Guide.

Photo: Looking south to Mount Lipsett from Highway #40. The southeastern summit is in the distance, at left.