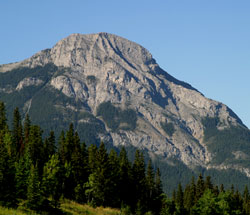 This mountain formed the backdrop to the Prisoner of War camp which operated on the site currently occupied by the University of Calgary facility at Barrier Lake. Occasionally one of the prisoners would ask to climb the mountain. Permission would be granted if they signed a document promising not to use the opportunity to escape. The mountain was referred to as Bald Mountain by Kendall Kerr of the Eau Claire Logging Company as early as 1883. (Lakusta) Prior to being officially named "Mount Baldy" in 1984, the mountain was referred to as Barrier Mountain by people working with the Kananaskis Foresty Experimental Station during the 1960's and 1970's, and the Federal Forestry Department in the 1950's. This name likely derived from the mountain's location adjacent to the Barrier Reservoir that was built in 1946. Perhaps it was because there was already a Barrier Mountain in the Red Deer Valley that this name did not become the official name of the mountain. Note that there is a mountain in the South James River valley named Old Baldy. Baldy Mountain is in the Elk Valley of British Columbia.