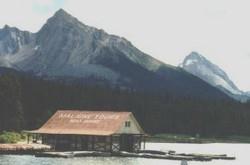 Samson Peak and Leah Peak are somewhat similar in profile when viewed from the northern end of Maligne Lake. They were named by Mary Schaffer for a married couple, Leah and Samson Beaver. Samson was the Stoney Indian who provided Mrs. Schaffer with the map she used to find the lake. Samson had visited the lake with his father when he was fourteen years of age. Sixteen years later he drew the map from memory when he met Mrs. Schaffer at Elliott Barnes' cabin on the Kootenay Plains in the Saskatchewan Valley