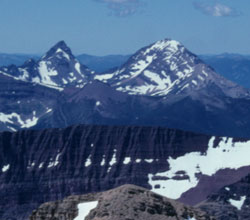 Note that there is a Mount King Edward in the Sir Winston Churchill Range, adjacent to the Columbia Icefield. King Edward VII was the eldest son of Queen Victoria and was 59 years old when he became King in 1901. His mother had allowed him no political influence at all and it is said that he resented this. Affectionately known as "Bertie" by his family, he lived a self-obsessed life complete with many mistresses and much self-indulgence. However he did change British foreign policy, gaining the goodwill of France and beginning active rearmament, his concern being Germany under Kaiser Wilhelm. Mount Kirby & Spence is shown to the south of Mount Yarrell on John Palliser's map and on George Dawson's 1886 map. Kirby & Spence were early 19th century British entomologists and the names would likely have been chosen by Thomas Blakiston. [Tony Rees] The names are not in use today but it seems likely that they were applied to the mountains now known as Starvation Peak and King Edward Peak. Dawson's August 15, 1874 journal entry reads, "Looking westward - the valley of the pass is seen to run S.W. between two splendid mountain masses, of which the tops are covered with snow, & which were at once recognisable as Mts Kerby&Spence, and Mt Yarrel of Blackistons map." [Bruce Haig's www.ourhertiage.net]