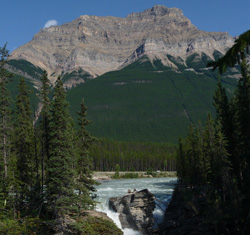 Although only 2984 metres high, this classic mountain often dominates the view from the north as one travels south from Jasper, an excellent viewpoint being the Athabasca River Bridge. A closer view may be enjoyed from Athabasca Falls. The peak's strata is such that snow often highlights its many layers which form a gentle synclinal fold. Being such a prominent peak, it is not surprising that it was named by James Hector when he travelled up the Athabasca Valley in 1859. However the reason for the name was not recorded and just who or what Kerkeslin was remains a mystery. This is very unusual as the history of the naming of our mountains has generally been well documented. Mount Kerkeslin is probably the most prominent peak in Alberta which carries a name whose derivation is not known with certainty. Joyce McCart has advised that the name of the mountain may be based on the Indian name for wolverine. To support this theory she refers to the following quotations from Hector's journal written during his 1859 visit to the Athabasca Valley south of Jasper. January 22, 1859: "The great danger to a cache is from the wolverine...Their Indian name is ker-kes-shu." February 14, 1859: "As we were halting for a rest a wolverine came wabolling down the river on the ice. We remained still till he got quite close without seeing us, when Moberly fired and put the ball right through him, so that his blood spouted out on the snow. He at first rolled over, but on our approaching him he started up and ran off, staining the snow with blood. We followed on our snow shoes, and pressed him hard, so that he ran up the bank and made for the mountain, where, getting into a clift of rock, he escaped us." Hector wrote this second entry when he was on the Athabasca, upstream of the mouth of the Whirlpool and near to where he named Mount Tekarra and Mount Moberly. Another possibility is that Mount Kerkeslin is the "Mount Moberly" that is missing from today's maps. But Hector clearly had wolverines on his mind at the time he was within sight of what is now Mount Kerkeslin.

Mount Kerkeslin from the northwest from the Icefields Parkway

Photo: Mount Kerkeslin from the northwest at the Athabasca River Bridge from the Icefields Parkway