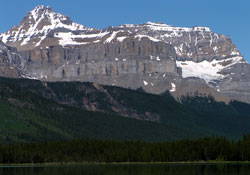 Kaufmann Peaks are a striking pair of very similar mountains which share a lovely glacier below them. Their summits are almost identical in outline, within fifteen metres of being the same height, and both appear to be split near the top creating twin summits. On the right hand summit, this effect is caused by a patch of snow near the peak. Quite appropriately they are named for two brothers. Christian and Hans Kaufmann were members of a well established Swiss guiding family and worked as guides for the CPR.

Christian and Hans Kaufmann were members of a well established Swiss guiding family and worked as guides for the CPR. Both were highly respected and were in constant demand because of their mountaineering skills and to some extent because they both spoke excellent English.

Their nephew, Peter, guided parties in 1930.

Prior to coming to Canada, Christian Kaufmann guided in the Alps, his most famous client being Winston Churchill who he led up the Wetterhorn in 1894. Christian first came to the Canadian Rockies in 1900 with Norman Collie and his party on their expedition to the Bush River. He returned again in 1901 as one of four guides contracted to Edward Whymper. Completing 36 first ascent in the Canadian Rockies, he made fifteen of those in 1901 and ten more in 1902 when he again climbed with Norman Collie.

Hans Kaufmann completed twelve first ascents in the Rockies during the years 1901 to 1904.