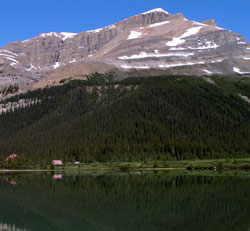 The highest point on Mount Jimmy Simpson is the westernmost of the two summits. The peak that overlooks the lodge (the easternmost) is 177 metres lower.

The first ascent infomation is taken from "Summit Tales" (page 56) by Graeme Pole.

Jimmy Simpson emigrated from England, arriving in Winnipeg in 1896. After being very unimpressed with the possibility of a life on a farm which his uncle had arranged for him to buy, he returned to Winnipeg. Having parted with all of his money in the taverns, he pawned his gold watch and chain and bought a train ticket to Calgary. Hearing of work with the railway in Golden he stowed away on a westbound passenger train but was discovered by the conductor and summarily tossed off the train at Castle Mountain from which he walked to Laggan, below Lake Louise. It was probably during this walk that Jimmy became rooted to the Canadian Rockies.

The next year Jimmy was working as a cook for Tom Wilson and began learning the guide and outfitting business from the legendary Bill Peyto and Tom Lusk, as well as from Tom Wilson himself. In 1902, while working for Peyto, he was given the responsibility of leading James Outram's very successful climbing expedition into the headwaters of the North Saskatchewan and the Columbia Icefield. It was on this trip that his client refused Jimmy's request to accompany the party on the first ascent of Mount ColumbiaMount Lyell, and help carry a heavy camera to the summit, it was Jimmy's turn to say no.

Before long he, like many other of Wilson's employees, left to go into the business on his own and Jimmy began to combine the life of operating a guiding business in the summer with trapping in the winter. Snowshoes were a requirement for trapping and he soon learned to travel on them with such speed that the Stoney Indians gave him the name "Nashan-esen" which meant "wolverine-go-quickly."

In 1920 Jimmy made application to the Parks Branch to lease five acres of land which included the spot at which he camped on his first trip up the Bow Valley in 1898. A small log building was completed on the site in 1922, and the plan was to use it in conjunction with his outfitting business. Because of the stunted trees at the high altitude of Bow Lake Jimmy designed an octagonally shaped building with sides of ten feet each. He named the building "Num-te-jah," the Indian word for pine marten. During the 1930's Jimmy's business operations shifted from Banff to Bow Lake. The building of the Banff-Jasper Highway during the depression years brought automobile traffic to the area and Jimmy found it necessary to begin a major expansion in 1937. This is the red-roofed which is seen from the highway. The original building became Jimmy's personal residence and he spent his later years living in what became known as the "Ram's Pasture."

Jimmy continued actively guiding parties until the end of the Second World War when his son took over the business. He remained quite active at Num-te-Jah, enjoying his well-earned status as "Grand Old Man of the Mountains" until his death in 1972 at the age of 95. Two years later the mountain to the northwest of the lodge was named Mount Jimmy Simpson in his honour.

From the Bow Lake viewpoint we can reflect on Jimmie Simpson's words, "There is absolutely nothing in the city to give us the same feeling as the great, mysterious things of nature even though they be stone and ice. It is only among them that we feel the utter helplessness and insignificance of ourselves."