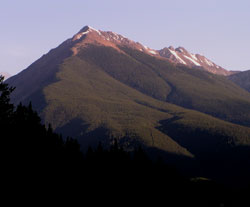 James Hector's 1858 journal contains this entry that was made following Hector's being kicked by a horse: "As I was quite unable to move I sent my interpreter, Peter Erasmus, to ascend Mount Hunter, which is included in the angle of Kicking Horse River." It is thought that Erasmus was sent to take bearings and see what kind of mountains lay to the west. [Beers] The southern ridge of Mount Hunter has been the site of two fire lookouts over the years, the higher one at an elevation of 2065 metres was built in the 1940's but replaced in the early 1990's by a tower that still stands at an elevation of 1600 metres. This lookout has since been removed. The mountain appears on George Dawson's 1886 map. Note that there is another Mount Hunter in Alberta.

Photo: Looking southwest to Mount Hunter from near the Finn Creek Picnic Area

Looking west to Mount Hunter from the Trans-Canada Highway