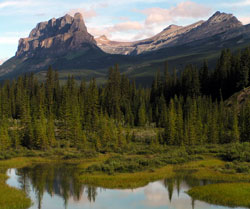 Province: Alberta
Park: Banff
Headwater: Bow
Visible from Highway: 1, 93S
Year Named: 1910
Named by: Charles D. Walcott
Named for: Stevens, Helena B. (Helena was the first wife of Charles D. Walcott, who studied the geology of the Rockies in the early 1900's.)

Helena Ridge lies to the northeast of the high valley to the right of Castle Mountain when it is viewed from the Trans-Canada Highway, southeast of Castle Junction. The ridge descends slowly from behind Castle Mountain and extends to the valley containing Johnston Creek. Dr. Charles D. Walcott spent many summers studying the geology of the Canadian Rockies and chose to name this feature after his first wife, Helena Stevens. A high point near the northwest end of the ridge was named for his son Stuart. (see Stuart Knob.)

A summary of Dr. Walcott's work in this area was published by the Smithsonian Institute in 1928. The 368 page book is filled with detailed geological information but there is a single reference to his wife in the introduction of the "Wild Flower Canyon Section," where he notes that, "Mrs. Walcott identified 82 species in blossom in July within a short distance of the pond."

Sadly, Helena Walcott was killed in a train accident in 1911.