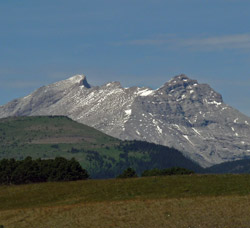 50.4403N -114.650W
Located in the Highwood River Valleysouth of Head Creek and north of Wileman Creek

Mount Head lies to the north of a high, broad saddle which connects it to Holy Cross MountainJohn Palliser placed the name "Mount Head" (in rather large letters) on his 1865 map but did not refer to its specific location in his written report. However he obviously felt that it was a significant point because it is one of only a few named mountains on his map between the Bow Valley and the American border. The name was placed on the Continental Divide at what appears to be the location of what is now known as Mount TyrwhittHighwood Pass. It seems probable that Palliser was not referring to the mountain which we now know as Mount Head or to Mount Tyrwhitt. It is thought that he may have applied the name to the large group of mountains at the head of the Kananaskis and Highwood Rivers or perhaps to Mount Joffre that he saw during his trip over North Kananaskis Pass in 1858. However, if he had either of these intentions, he placed the mountain in the wrong spot on his map. With a copy of the map in hand, George Dawson travelled up the Highwood River in 1884 making a more detailed survey of the area. He realized that the mountain seen from Eden Valley was not significant enough to have been noted on Palliser's map. He also noted that the map showed the mountain to be located just northwest of the northern extremity of the Livingstone Range. Dawson determined that what we now know as Mount Head was the closest mountain to the point labelled Mount Head (at least relative to the Livingstone Range on Palliser's map) and so decided that, "There is no reason why the name should not be preserved in connection with the mountain, even if it be not that originally intended." However the status of Palliser's report was such that on many small scale maps of the Canadian Rockies printed as late as the 1920's, Mount Head appears on the Continental Divide and is the only named peak between Kicking Horse Pass and the International Boundary. The mountain honours Sir Edmund Head, Governor General of Canada at the time of the Palliser Expedition. John Palliser's father was an old friend of Sir Edmund's who encouraged Palliser and even gave him a retrieving dog to take on the expedition. It is a most intriguing coincidence that there is a distinct "head" shape on the northeastern ridge of the lower, eastern summit when viewed from the Highwood Valley and from the foothills to the east. Could Palliser's assistant, Thomas Blakiston, have noticed "the head" when he travelled along the route of the present Highway #22? The presence of this head, gazing towards the northern skies, seems a very logical explanation for the mountain's name to those who have not read this interesting history and maybe, just maybe, it was noticed by Blakiston as well. The Boundary Pine was a favourite destination for Raymond M. Patterson's family when they lived on the Buffalo Head Ranch. The pine stands on a ridge near Grass Pass which was near good springs and grass. The steep sides of the ridge formed the southern limit of the Buffalo Head grazing lease. A photo of the pine taken in 1942 appears in "The Buffalo Head" by R.M. Patterson and in David Finch's biography, "R.M. Patterson -A Life of Great Adventure."

Looking north up Stoney Creek to Mount Head from Highway #541

Photo: Looking northwest to Mount Head from near the Eden Valley Bridge on Highway #541

Looking west to Mount Head from Sullivan Hill on Highway #541

Photo: Mount Head from the south at The Boundary Pine (The "Head" is formed by the ridge at right, but is not visible from this angle.)