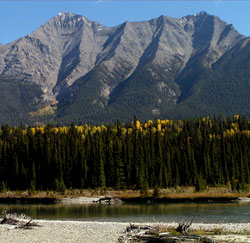 50.7969N -115.864W
Located in the Vermilion River Valley north of Pitts Creek and at the head of Magnesite Creek

Range: Mitchell
Province: BC
Park: Kootenay
Headwater: Kootenay
Major Valley: Kootenay
Visible from Highway: 93S
Year Named: 1923
Named by: Morrison Bridgland
Named for: Harkin, James Bernard (A noted conservationist, James Harkin was the Dominion Commissioner of Parks from 1911 until 1936. He has been referred to as the "Father of the National Parks of Canada.")

Regarding mountains, James Harkin once said: "People sometimes accuse me of being a mystic about the influences of the mountains. Perhaps I am. I devoutly believe that there are emanations from them, intangible but very real, which elevate the mind and purify the spirit." James B. Harkin was the first commissioner of National Parks for the federal government from 1911 until 1936 and has been referred to as the "Father of the National Parks of Canada." Over the years the National Parks have been administered through a number of different government departments but have always maintained a separate identity and a special sense of purpose and idealism. This is said to have been initiated and fostered by James Harkin. In his book celebrating the first century of Canada's National Parks, Sid Marty wrote that Harkin was, "an enlightened thinker, and a wide-ranging reader in the field of conservation. He was also a devout Christian who came to see the wilderness as the ultimate expression of God's handiwork. His efforts of behalf of the National Parks movement were in the nature of a personal crusade. He was honest and modest." Summarizing his feelings towards national parks, James Harkin wrote, "National parks are maintained for all the people -for the ill that they may be restored; for the well that they may be fortified nd inspired by the sunshine, the fresh air, the beauty, and all the other healing, ennobling agencies of Nature. They exist in order that every citizen of Canada may satisfy his craving for Nature and Nature's Beauty; that he may absorb the poise and restfulness of the forests; that he may fill his soul with the brilliance of the wild flowers and the sublimity of the mountain peaks; that he may develop the buoyancy, the joy, and the activity that he sees in the wild animals; that he may stock his brain with great thoughts, noble ideals; that he may be made better, healthier, and happier." Prior to Harkin's administration, the areas of the mountain national parks had been reduced substantially. Harkin worked towards reversing this trend and restoring the old boundaries. He also worked towards the creation of a separate National Parks Act in order to protect the parks from future industrial exploitation. Under his guidance the parks system was expanded on a nation-wide scale and the number of parks tripled to eighteen by 1932. He established new standards for their preservation, control, and management when there was little or no precedent for conservation in Canada. The annual Harkin Conservation Award was established by the Canadian Parks and Wilderness Society (CPAWS) in 1972 to honour the memory and achievements of James Harkin. The award was created to recognize special Canadians who have served the cause of conservation with distinction.