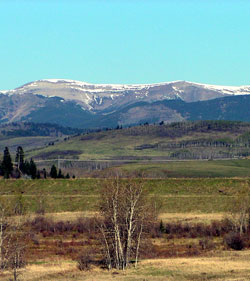 This broad, smoothly contoured mountain is often difficult to distinguish from Plateau Mountain, which lies to the west of Hailstone Butte, when viewed from the prairies. It lies to the north of Highway #532 which climbs to an elevation of 2027 metres at a pass known locally as, "The Hump." Teardrop Lake lies at the summit of the pass.

When the Cameron Lookout on Mount Burke was closed in 1952, it was replaced by a lookout on Hailstone Butte and another on Raspberry Ridge. In both cases, very ugly bulldozed roads were built on the steep alpine meadows to provide access. Restoration has been somewhat successful in both cases.

Looking north-northwest across The Hump to Hailstone Butte