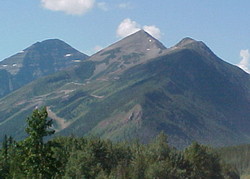 Gravenstafel Ridge is the mountain upon which the Westcastle ski runs are located. The original Gravenstafel Ridge is located in the Flanders area of northern France. One of the highest points in the area, the ridge was the scene of several battles involving the Canadian Army including the Second Battle of Ypres in 1915. Their efforts and sacrifices were honoured by the naming of this attractive feature.