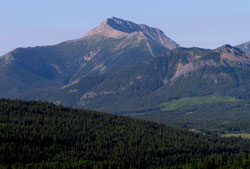 As one drives up Mill Creek on the Gladstone Valley Road the spectacular Windsor Mountain can be seen in the distance but it is Mount Gladstone that dominates the view at the head of the valley. W.S. Gladstone was born in Montreal, Quebec in 1832. Raised in his parents' boarding house, located close to the Hudson's Bay Company's warehouses at Lachine, he heard enticing tales of life in the west. He joined the Hudson's Bay Company at the age of sixteen as a carpenter and apprentice boat builder. He was sent west shortly after joining the HBC and spent five years working at Rocky Mountain House in the winter and Fort Edmonton in the summer. He helped build the large, flat-bottomed York boats which carried the winter's furs and provisions down-river each spring, and returned with the next season's outfit each autumn. During his years with the Hudson Bay Company he acquired the nickname "Old Glad." In the spring of 1853, after five years with the HBC, he was sent down to York Factory with a load of furs and instructions to bring back additional trade goods. On his return he also brought a passenger, Father Lacombe, who was to have a crucial influence on the history of Alberta, particuarly in the area of the relationship between the new settlers and the Native People. In 1855, so the story goes, "Old Glad" wanted to marry a Metis girl at Fort Edmonton. The girl was Roman Catholic and Father Lacombe wanted Gladstone to change his religion but he refused. The priest finally agreed to marry them but told Gladstone that he would not be able to wear his vestments during the service. "Old Glad" is said to have replied, "I don't care if you're bare naked just as long as you marry us." It was a good thing he did as she twice saved his life, once when he fell through the ice on a cold day and another time when a prospector pulled a gun to shoot him, Gladstone's wife knocked it out of his hand with an axe." ("Rocky Mountain House" by Fred Stenson) For the next nine years Gladstone travelled widely over western Canada, meeting up with the members of the Palliser Expedition at one point and later joining a group of prospectors who were heading for Montana following the discovery of gold. However upon arriving in the goldfields he set up a carpentry shop instead. In 1870 "Old Glad" was involved in the building of Fort Hamilton just west of Lethbridge. The previous fort at this site had burned down and because there was so much money to be made selling whiskey to the Canadian natives, its American owners hired "Old Glad" to put up a strong, well-fortified trading post. Business was so good at the new fort that it soon became known as Fort Whoop-up. "Old Glad" worked at the fort during the winters until 1874 when the arrival of the North West Mounted Police brought the end of the whiskey trade by the Americans. Taking advantage of new opportunities Gladstone then operated a sawmill near the creek which bears his name and prepared lumber, windows, and doors for the North West Mounted Police fort which was built at Macleod. According to Cecil Denny (see Mount Denny) Gladstone ran a carpenter shop at Fort Macleod druing the winter of 1874-1875. "Old Glad" continued to live in the Mill Creek Valley until he passed away in 1911. The mountain and creek were named in his honour in 1916. [Additional information: "Rocky Mountain House" by Fred Stenson]