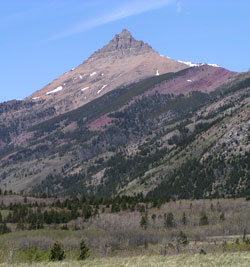 49.1231N -113.946W
Located north of Blakiston Creek at the head of Galwey Brook and the head of Coppermine Creek; east of Lost Horse Creek

As one drives up Blakiston Creek on the road to Red Rock Canyon the sharp, colourful peak that is the southern end of Mount Galwey is most impressive. However when viewed from the east, the fact that the mountain is a long, high ride becomes apparent. THE INTERNATIONAL BOUNDARY SURVEY (1872-1876) Lt. Galwey was the Assistant Astronomer on the International Boundary Survey and as such, was one of a team of scientists that completed an extensive amount of work in conjunction with the actual deliniation of the border. Much of the early exploration of Canada was undertaken by explorer-surveyors. Alexander Mackenzie, David Thompson, John Palliser, and Simon Fraser were explorers and adventurers of heroic stature. But the surveying of the new lands through which they travelled was a critical part of their work and each produced maps which were of great importance to the country's development. Others such as Dr. W.G. Boswell, and Donald Cameron were explorer-surveyors in a more limited sense, their work involving the more mundane task of determining the location and marking of the precise boundary which separates what was to become the Prairie Provinces from the United States. These explorer-surveyors, seldom far from their bulky surveying instruments, had their own challenges and rewards as new areas of Canada were made ready for orderly development. Undoubtedly they enjoyed the pleasure of exploring in some detail the spectacular scenery to be found in this corner of Alberta and of naming many of the features. Differences of opinion between Canada and the United States concerning the placement of the international boundary through the islands in the Strait of Georgia between the mainland and Vancouver Island had been settled cordially by an international boundary survey commission which existed from 1857 to 1862. This success led to the formation of a similar commission in 1870 which was given the task of marking the boundary from Lake of the Woods, Manitoba to the Continental Divide. Archibald Campbell was chosen to be the United States Commissioner of the survey. Prime Minister John A. Macdonald recommended a Scottish-born officer of the Royal Artillery, Capt. Donald Cameron to be the Campbell's Canadian counterpart. The natural history of the areas surveyed was to be studied as well and this aspect was put under the direction of 25 year old George Dawson, the son of the principal of McGill University. During the course of the survey Dawson gathered information that was eventually published as a 387 page "Report on the Geology and Resources of the Region in the Vicinity of the 49th parallel from the Lake of the Woods to the Rocky Mountains." This document established the scientific reputation of George Dawson. He became known as "Dr. George" and went on to become one of the most outstanding scientists Canada has ever produced, building the basis for much of the geological and botanical knowledge of western Canada. The two commissioners, Campbell and Cameron, first met in 1872 and the following year saw the beginning of the long trek westward. The contrast in policy towards the continent's native population was evident as the American surveyors were supported by 230 armed men, two companies of cavalry and a company of infantry, as a precaution against possible Indian hostility. On the other hand the British did not consider an armed escort necessary. In Cameron's opinion, the British flag was all the protection they required. The surveyors and their supply trains made for an impressive sight as they travelled across the dusty, desolate plains. The Americans used mules to haul their wagons; the British oxen to pull the legendary two-wheeled Red River Carts. Prairie fires and snowstorms hindered progress as summer ended. The surveyors had evolved into expert plainsmen, their lives a combination of adapting to challenging frontier conditions while at the same time remaining devoted to the scientific methods of their day. Through 1874 and 1875 the survey continued, extending the cairn marked boundary line across the three prairie steppes to the mountains and finally to the Continental Divide. By the time the final meeting of the Commissioners Campbell and Cameron was held in London in 1876, 388 survey monuments such as iron pillars, stone cairns, earth mounds, timber marks, and mounds of mixed earth and stone had been established along the 49th Parallel of latitude. The now visible evidence of an international border was quickly put to use by the North West Mounted Police. The bootlegging of liquor by Americans to the Canadian Indians could now be controlled. One of the first to make effective use of the newly marked border was Sitting Bull and his Sioux warriors who fled to safety in Canada after the massacre at Little Big Horn in Montana. At the conclusion of their work and after surveying the border across 1400 kilometres of prairie, the surveyors must have taken some satisfaction from naming some of the features in the mountainous portion of their assignment. Cameron Falls in Waterton Townsite and Cameron Lake, which straddles the international border, were named in honour of the Canadian Commissioner. Cameron had divided the functions of his commission into various categories. Dr. W.G. Boswell was in charge of the veterinary duties which must have been crucial to the smooth running of an "animal supported" surveying organization which covered thousands of kilometres. The slopes of Mount Boswell cross the 49th Parallel on the eastern side of Waterton Lake. Lieut. Anderson, who was Cameron's chief astronomer, was honoured by having a mountain locally known as "Millionaires Peak" renamed Anderson Peak and the survey's geologist Hilary Bauerman was honoured by the naming of a neighbouring peak. Both these mountains lie near the headwaters of Blakiston Brook in the northwestern corner of Waterton National Park. Lt. R.E. Galwey was the Assistant Astronomer on the survey. Mount Galwey is located in the Blakiston Creek valley. The Americans honoured their commissioner, naming a peak just south of the border on the western side of Waterton Lake Mount Campbell.