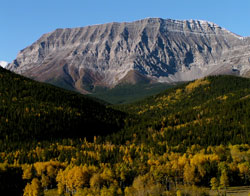 Mount Armstrong's west face features a number of vertical ridges which are often highlighted by snow and by sun and shadow. Formerly known as Table Mountain because of its broad, flat top, Mount Armstrong was named after J. D. Armstrong of the Surveyor General's staff who was killed in action in 1917. Don King and friends were some of the earliest mountain enthusiasts to explore the Misty Range and other mountains west of their hometown of High River. They began a tradition, which lasted for several summers, of camping on the summit of a mountain west of their home town and, at a pre-arranged time and date, shooting flares into the night sky. Hundreds of people in the area would assemble on hilltops and other suitable sites to watch the show that occurred precisely on the second as planned. During July 1943, Don, Robert Cousins, Leonard Blayney, Ken Logan, and Dennis Gibson drove a Model T named "Old Mayflower" to the Highwood Ranger Station before hiking up what were then still fire-blackened valleys to the base of Mount Armstrong. The next day they climbed the mountain but being un-equipped to bivouac and determining that it would be too dangerous to descend after dark, decided that a low hill near their campsite below the peak would be their first launch site. Following their adventure, young Don wrote the following poem: ---------Rocky Wonderland--------- Up from the valley, over the mountain, Follow the golden glow; Come to the land of the youthful fountain, High where the cold winds blow. Stand a moment, deign to listen, Scan the valley wide, See the sun-lit snow a-glisten On the mountain side. Gaze across the misty space From mountain cliff and crag; To cataract and grassy place Where marmots play at tag. This, then, is Mount Armstrong bold, Foundation of a border; Nature's blockhouse none can hold, A fortress made to order. Drop your packboard, burdened high, Sling your bedroll down; Reach up and grasp the azure sky, Let cloudbanks be your crown. Unroll your bed on boughs of pine, Pitch your tarp'lin low; Cache your grub "bove timberline In a patch of snow. Lie and listen in the night To mountain gophers' peep; And as a clound snuffs out our light We settle down to sleep. ---Don King passed away in 2007.

Photo: Looking southwest to Mount Armstrong from the Cat Hills