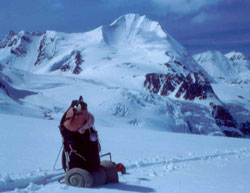 51.7428N -116.946W
Located on the continental divide between Freshfield Icefield and Campbell Icefield

Norman Collie first climbed high on Mount Freshfield with George Baker and Peter Sarbach on August 29, 1897, his initial summer in the Canadian Rockies. However the party spent a considerable amount of time photographing and surveying the surrounding country and it appears ran out of time to reach the summit. Of the view from Mount Freshfield that day, Collie later wrote, "There is a great, if undefinable, pleasure in standing on a high mountain summit in a country but imperfectly known; so many uncertainties vanish in a moment, often with the comment - spoken or unspoken - 'I though so'; while a host of new possibilities and further queries take their place." Collie returned to the area in 1902 and completed the first ascent of Mount Freshfield with James Outram, Hugh Stutfield, G.M. Weed, and Herman Woolley. Douglas William Freshfield 1845?1934 was an English explorer and mountaineer. A prominent member of the Royal Geographical Society, he climbed in the Caucasus, the Himalayas, and the mountainous regions of many other countries. He edited (1872-80) the Alpine Journal and wrote The Exploration of the Caucasus (1896), Round Kangchenjunga (1903), Italian Alps (1875; new ed. 1937), a biography of H. B. de Saussure (1921), and Below the Snow Line (1923).