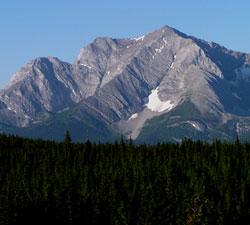 A "Mount Fox" was named by Captain Palliser and shown on his 1860 map but, like Mount Head in the lower Highwood Valley, the mountain now designated as Mount Fox was almost certainly not the mountain which Captain Palliser had in mind. Mount Fox is not a high nor prominent peak and since it is not located near North Kananaskis Pass through which John Palliser is thought to have travelled. It is likely explanation that Palliser was referring to the group of mountains now known as the British Military Group and dominated by Mount Sir Douglas. It is not certain who Capt. Palliser had in mind when the name was chosen. A likely individual was Sir Charles Fox, a prominent British railway designer who built lines in Africa, Asia, Europe, and Eastern Canada. The first ascent of the peak was completed on July 31, 1916. This was a special trip for the Interprovincial Boundary Survey as heavy snowfall the previous fall had prevented the placing of a "Brass Bolt and Cairn No. 8M" on the summit when the survey of the area was being finalized the previous fall.