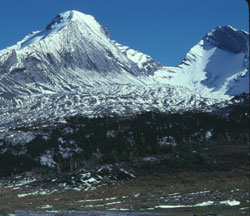 Mount Foch was named after Marshall Ferdinand Foch, supreme commander of allied forces during the latter stages of The Great War. In March of 1918 a massive German offensive threatened Paris and the channel ports and it was at this point that Foch was appointed "Generalissimo." Known as the Somme Offensive, it was not immediately stopped but it is thought doubtful that any other commander could have held the Allies together as he did or recovered the military initiative as quickly. It is part of a group of peaks known as "The French Military Group."