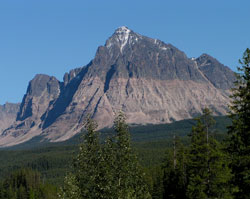 This impressive mountain dominates the view as one travels east along the Yellowhead Highway and the Fraser River towards Yellowhead Pass. Although Mount Fitzwilliam is entirely in British Columbia, it lies directly south of Yellowhead Pass. Its most distinctive aspect is the "two-tone" colour scheme, dark at the top and light at the bottom. According to Ben Gadd, the lower half is dolomite whereas the upper half is of quartzite covered with lichen and that gives it a very dark gray colour. In their book, "The North-West Passage by Land" (1865) that describes their trip through the Rockies in 1863, William Fitzwilliam (Viscount Milton) and Walter Cheadle describe the view of the mountains from "Buffalo Dung Lake" (now known as Yellowhead Lake) and go on to write, "Two of these on opposite sides of the lake were particularly fine, one to the north-west, the other to the south-west; and the Iroquois assured us that they should be known from that time forth as "Le Montagne de Milord" and "Montague de Docteur." We, however, took the liberty of naming them Mount Fitzwilliam and Bingley Peak." Viscount Milton's father was the sixth Earl of Fitzwilliam. Arthur Coleman referred to the mountain as "Pelee" in 1907. Mount Fitzwilliam was first climbed in 1917 by members of the Interprovincial Boundary Survey.

Looking west-southwest to Mount Fitzwilliam from near Maligne Canyon