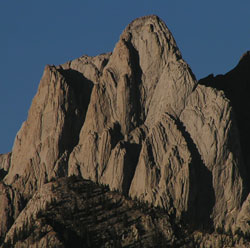 Photo: Looking west to The Finger from the Trans-Canada Highway

This feature is a high point on the Sawback Range southeast of Cockscomb Mountain. The peak is named after a mountain in British Columbia that was named and climbed by the protagonist in Earle Birney's poem "David." The name is not official. A distinctive spire outlined against the sky when seen from the south near the ñMuleshoeî picnic site on the Bow Valley Parkway, "The Finger" seems to disappear into the jagged Sawback Range when viewed from farther to the northwest. "The Finger" was brought into prominence through a poem written by Earle Birney. David Cunningham Warden was a friend of Birney's who fell to his death in the Coast Mountains north of Vancouver in 1927. Birney wrote in his book, "The Cow that Jumped over the Moon" that, "He used the outline of events, the name David, and what he knew about the young man''s character in his poem." [Don Beers] Earle Birney moved to Banff as a child in 1911, and lived there for most of the next twelve years. The poem was written in 1940 and is fictional but based on BirneyÍs climbing experiences when he worked in the Banff area as a young man. "David" tells of two young men becoming knowledgeable in the ways of the mountains and then discovering "The Finger." "By the fading shreds of the shattered stormcloud. Lingering There it was David who spied to the south, remote, And unmapped, a sunlit spire on Sawback, an overhang Crooked like a talon. David named it the Finger." In the poem the author slips on the summit, and in the process of regaining the authorÍs balance, DavidÍs foothold breaks and he falls to a ledge below. His back broken, he begs the author to push him over the cliff, fearing a long and protracted death or perhaps to avoid living the rest of his life as a cripple. If you read the poem you will never drive past The Finger without remembering "David." The poem may be found in Brian Patton''s book, "Tales from the Canadian Rockies." The Finger caught the eye of Lawrence Grassi who is thought to have made the first ascent during the 1930''s.

Photo: The Finger from the Bow Valley Parkway near Muleshoe

The Finger from the Bow Valley Parkway