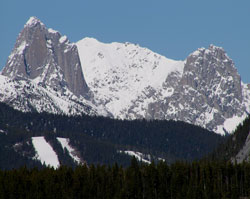 Photo: Mount Louis (left) and Mount Fifi (right) from Highway #1 at the former site of the Town of Anthracite, 10.5 km east of Banff

Mount Edith, Mount Louis, and Mount Fifi were all named one day in 1886 when Canada's first Prime Minister, Sir John A. MacDonald, and his wife were making a cross country trip on the recently completed Canadian Pacific Railway. Louis Stewart, the park superintendent's son, took Lady MacDonald's "attendant", Edith Orde, and her dog Fifi hiking to Edith Pass. The pass provides views of the three peaks and a park surveyor named them after the two hikers and the dog. There are many mountains in the Rockies named after people but this may be the only one officially named after a dog. In 1911 a bulldog named Hoodoo, even though he had to be hauled up the final cliffs by a rope, reached the summit of a mountain near Snake Indian Pass in Jasper National Park and was honoured by having the peak named after him. Sadly, the name was never officially adopted and the peak was named Monte Cristo Mountain in 1934 although no one knows why. Zeke's Peak near Mount Sir Douglas in the Kananaskis Lakes area is unofficially named after a dog that accompanied the first ascent party to the summit in 1973.