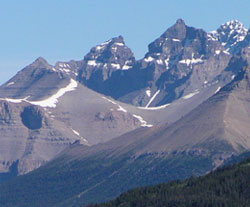 Mount Murchison was named by James Hector in 1858 after Sir Roderick Murchison who was at that time the director of the Geological Survey of Great Britain and had recommended that Hector be chosen as the geologist on the Palliser Expedition. In a letter written in 1859, Sir Murchison thanked Hector, "for attaching my name to this culminating point." The base of Mount Murchison covers an area measuring five km by seven km. There are two high points on the main summit (northwest and southeast). They are 700 metres apart. Seven "towers" in excess of 3050 metres (Engelhard TowerGest TowerFeuz TowerBison TowerCromwell TowerHall TowerSouth East TowerEdward Feuz jr. (1884-1981) was the son of Edward Feuz sr. Together with Christian Hasler sr., Edward Feuz sr. was the first of the Swiss Guides to be brought to Canada by the Canadian Pacific Railway. William Van Horne, the president of the railway, was attempting to promote a program of attracting tourists to the Rockies and the CPR's hotels. One of his ideas was to supply guides for the mountaineering parties. Edward Jr. arrived in Canada in 1903 to work for the Canadian Pacific Railway. His father, Edward sr., had done the same thing in 1899 and Edward jr. was to apprentice under his father. Edward jr. began work at Glacier House near Roger's Pass and continued to be employed by the railway until his retirement in 1949. He guided privately until 1953, completing a fifty year career as a mountain guide. Credited with being the first person to stand upon the summit of 78 peaks and with leading 102 new climbing routes, he was never involved with a fatal accident. In 1922, while based at Lake Louise, he was instrumental in the building of the "Swiss style" alpine hut on Abbot's Pass (between Mount Lefroy and Mount Victoria) at an elevation approaching 3000 metres. The "Climber's Guide to the Rocky Mountains of Canada" is a listing of the first ascents of all the mountains and important routes in the Rockies. The name of Edward Feuz jr. seems to be on every page. He climbed virtually all of the significant peaks in the Rockies and many in the Selkirks as well. Edward Feuz climbed Mount Victoria on numerous occasions, the last time being when he was eighty-five years old, eleven years before his death in 1981. [Additional Information: Kauffman, Andrew J., William L. Putnam. "The Guiding Spirit". Revelstoke: Footprint, 1986; Edward Feuz jr.; a Story of Enchantment by D.L. Stephen ]