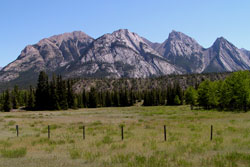 52.0364N -116.334W
Located in the North Saskatchewan River Valley between the Siffleur River and Whiterabbit Creek

Ex Coelis Mountain is a complex feature with five peaks. Referred to as Kadoona Mountain by Mary Schaffer, the name was not formally adopted and the feature was officially named in 1994. Ex Coelis is Latin for "Out of the Clouds" and is the motto of the First Canadian Parachute Battalion, one of eight battalions which made up the Sixth British Airborne Division during World War II. When the mountain was named the battalion association?s president referred to the peaks as, "A bold memory of jumpers buried on foreign soil." When the invasion of France began on D-Day members of the battalion were among the first Allied force on the ground, taking off from their base at 23:30 and landing in France shortly after 01:00 on June 6, 1944. The unit had orders to demolish a bridge over the Dives River, thus hampering any German advance to the invasion beaches, and then to cover British paratroopers attacking a coastal artillery battery which was thought to threaten the beaches. They accomplished these tasks but with the loss of nineteen killed, ten wounded, and 84 taken prisoner. The large proportion taken prisoner occurred because many of the paratroopers became isolated when they landed far beyond the intended drop zone. In 1997 names were assigned to the five individual peaks of Ex Coelis Mountain. Normandy Peak, Ardennes Peak, and Rhine Peak were named after battles in which the battalion participated. Elbe Peak was named after a river in Germany near the point where the battalion met the Russian Army which had been advancing from the east. The fifth, Stan Waters Peak, was named after a battalion member who had an outstanding career both as a soldier and businessman. Stan Waters joined the Calgary Regiment (Tank) in 1940 and, while serving in the First Special Service Forces, was awarded the US Silver Star for gallantry in action in Italy. He commanded the first battalion to liberate Rome in June, 1944 and in 1945 saw action as a company commander with the First Canadian Parachute Battalion. After retiring from the military in 1975 with the rank of Lieutenant General, he had a successful business career and was involved with a wide variety of community service organizations in Calgary before being appointed to the Canadian Senate. In September, 2000, a monument honouring the Battalion was unveiled at a viewpoint parking area off of Highway #11 near the mountain. [The peaks were originally named Kadonna Peaks by Mary Schaeffer in 1911. Kadonna was/is the corruption of the Stoney pronunciation for what now is called Kootenay Plains. The Stoneys called it Kedonnaha Tinda, or Meadow of the Winds. When E.C.Barnes created his horse ranch on the Two O'Clock Creek Flats, in 1906, (sort of across from Tom Wilson's Trading Post, which was at the confluence of the White Rabbit and the Saskatchewan), Barnes called his ranch the Kadonna Ranch. -courtesy Anne Belliveau] [See Elliott Peak; Mount Wilson] [Additional information: "Out of the Clouds" by John A. Wiles]